Yesterday, my grandfather died. He was 93. He died at home, with family, after living his entire life on his own. And yes, I am about to use his death as a political post. He would appreciate it.

My grandfather was a fierce anti-racist who learned from and taught so many people. After the murder of Dr. Martin Luther King, Jr. he formed an organization in 1968 called Community Change, Inc in Boston, MA to reframe and fight racism, as the “white problem.” My grandfather spearheaded the movement at Community Change to “shine a spotlight on the roots of racism in white culture with the intention of dealing with racism at its source, as well as with its impact on communities of color.” Up until his 80s he gave tours at the Black Heritage Trail and often walked faster than the guests – even at his age – a trait us Seldons all carry.

On June 18, 2017 the Mayor of Boston declared the day, Horace Seldon Day, in honor of all his accomplishments, which are so many I don’t have time to write them out here. Pretty amazing, huh?

My grandfather was at his core – an activist. An avid reader, researcher, and teacher until last week – one of his most amazing projects was pouring over the original newspapers by abolitionist William Lloyd Garrison and synthesizing his teachings and insights into blog posts on this comprehensive site that he built: http://theliberatorfiles.com/ (Which by they way, if you click that link you’ll actually see and hear my grandpa calling us all to action.)

My grandfather was silly, often trying to challenge society’s rules and go against convention. I wouldn’t call my grandfather a loving person, but he loved people. His house is filled with two things: books and pictures of his friends and family, he also loves fish, so he has a fish thank decorated with the best fish tank ornaments that can be found online. He would make collages out of pictures and put them on his coffee table, dining table, really any flat surface he could. He knew amazing people too – transformative action takers that risked, and some even lost, their lives in the fight for equality. His email signature was, “OUR COUNTRY IS THE WORLD — ALL PEOPLE ARE OUR PEOPLE.”

One of the last emails my grandfather sent to us was a reminder that Nazism, white supremacy, and blind hatred are still alive in the US. I’m attaching the pics from the email here – it’s in 1939 at Madison Square Garden where people are saluting Hitler. My grandfather’s plea, “We cannot let this happen again.”

So, I’m wondering…if my grandfather, had seen the videos and the coverage of Charlottesville, what would he do? Aside from put his pen to paper and write write write, I know he’d also organize. He’d be forming neighborhood groups, going into Boston to set up task forces, and meeting with people to DO something. To offer support, to work on community and national policies, to strategize, and to move forward.

With that said, I know people will offer condolences that my grandfather has died. It is a natural thing to do, and I appreciate it. But, at the same time, he was 93. He lived independently his whole life. We knew this was inevitable and this is literally the best way things could’ve gone down. So I am not sorry he passed; I am sad, and I am motivated. Because “Hopeful Horace” as he so often signed his emails, deserves for each of us to work together, to keep moving forward, and to fight for equality for all. 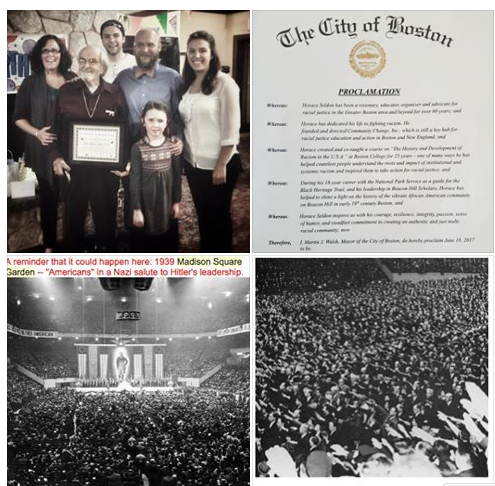